Humor: The Kid From Brooklyn

WARNING: This site is not for kids! and definetly NSFW (Not Safe For Work)!
Check out this site. Its some Jersey fella who rants via a video blog. He curses every other word but its pretty funny. He covers everything from the price of coffee at Starbucks to gay marriage. Take this link home with you:

Posted by Ben Ducklow at 7:53 AM No comments:

For those of you with an iPod, check out the new iTunes version 7.0. The coolest thing (besides an updated look) is a feature called Cover Flow wich allows you to view your collection as if it were a jukebox! Check out this screenshot off my iTunes collection!

I must warn you this new version does have some known issues. So if your the gambling kinda guy, download this baby otherwise wait for the next iTunes update which is sure to fix some of the known issues.
Posted by Ben Ducklow at 7:08 AM No comments:

OK, so its been a few weeks since the finale`. I wasn't to sure of the selection but after hearing 2 of their tracks, Lukas rocks! Check out some sneak peek audio tracks from the Rockstar Supernova album due out in November:

Posted by Ben Ducklow at 2:52 AM No comments:

Email ThisBlogThis!Share to TwitterShare to FacebookShare to Pinterest
Labels: music

So I went and checked out a great concert last week with some buddies at the Xcel Energy Center in St. Paul. Overall, the best lineup of bands that I wanted to see in a long while. Opening the night was Hinder. A a great new band that is worth checking out; they already have a few radio hits but the album itself is very good overall I first heard of Hinder back before they made it big on a great podcast I listen to on a weekly basis called Joe's Podhole. From this interview, I knew Hinder was all about rock-n-roll. Check out Joe's Podole episode #18 here. Chevelle was up second who also put on a good show...sound-wise. Not much to their stage show but I dig almost all their tunes even live; not band for a 3 piece band. Hoobastank was next and also a band I've seen before; again not a great stage show but was good overall. For the headliner, I was truly impressed. Nickelback put on a great stage show consisting of pyro that I simply haven't seen in a long while. These guys sound exactly like what your hear on their albums or the radio; even the singer had different microphones for different parts of the songs! Overall a great lineup and a great show.
Posted by Ben Ducklow at 12:03 PM 2 comments: 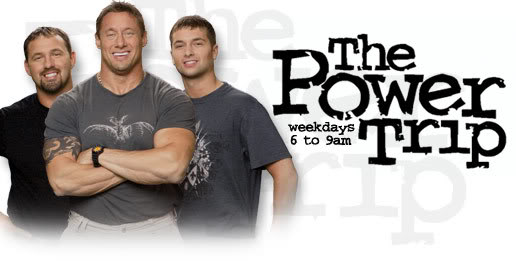 Ok, so it's the beginning of the football season, so I thought I'd throw something up that was sports related. I'm not a HUGE sports fanatic but I enjoy listening to this guy and his sidekicks. I have been listening to Mike Morris and the PowerTrip morning show for some time now and it's...well pretty cool. I tune into the on KFAN 1130 AM almost on a daily basis; it's ususally this or the KQRS Morning show.
Why you ask? Well, Mike is a former NFL football player, he likes hard rock/metal music, he's got an attitude and he's got a morning show! Besides most commercial radio sucks around here so I listen to talk radio, yeah I don't listen to the likes of 93X up here because they play the same stuff over and over. The PowerTrip morning show plays some cool 'bumper' music and have been actually turned onto some bands like Eighteen Visions and Thousand Foot Krutch because of it. Every Wednesday they have a guy come in from Sanctuary Records to talk about rock/metals bands, new releases and the music charts. Very cool. If you're not from the cities, you can stream all the radio shows online at KFAN.com
Posted by Ben Ducklow at 10:58 AM No comments:

Crowds flock to gawk and wonder

First of all check out this official radio advertisment clip of the official Minnesota State Fair. I hope they were'n't gawking and wondering at us! Well this years fair was...we...like most others. Usual crowds, usual foods, usual stenches. As you can see the boys enjoyed hitting the slide; I tried to get everyone fired up but I don't think they were into it like I was.

Overall, an OK time. We didn't get to hit the Midway or any other rides besides the slide. There's always next year I guess.

Posted by Ben Ducklow at 5:35 PM No comments:

Shhh! Here's the new Audioslave album that hasn't been released yet. The official street date is not until September 5th. Shhh! Audioslave rocks once agin with "Revelations". I've had a quick run through of the disc and its not bad! The first track definetly rocks! Click on this link or the image above to download the MP3's compressed in *.zip format. Shhh!
I'll leave this link up for a week or so.
Posted by Ben Ducklow at 6:14 AM No comments: