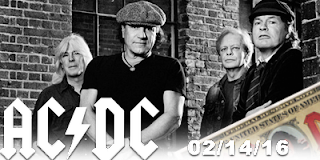 OK, so there has been alot that has happened in the AC/DC camp in the past year, but I decided to finally publish my review on the show they did (just weeks) before Brian Johnson left was outed by the band. I've been sitting on most of my words in draft form here on my blog since the event, not knowing when the best time to post this would be. With it being a year later, I think its an appropriate time.

To start, I've seen AC/DC once before - back on June 27 1991 as a matter-of-fact, at the ol' Met Center in St. Paul, MN. I was in high school then and attended the show with my great friend, Gary. I remember that concert pretty well. I actually still have some "Money Talks" Angus cash from that show! Fast forward ~30 years later - guess who I went and saw them again with? YES, Gary (along with a couple other great friends - Tim V. & Patrick M.)! I want to say this concert was one of the best shows I've seen in years. Maybe it was because I got to re-experience it with an old friend as well as witnessing the "shock-and-awe" on my others friends' faces as they experienced them live for the very first time. All I know is I was smiling ear to ear for a long time during this show.

Although it wasn't exactly the best day to see a concert, Valentines Day (February 14 2016), it was still very well worth it. To describe the atmosphere, the arena was packed! The blinking, red, light-up Angus devil horns souvenirs (mainly purchased by female fans) had illuminated the open arena space and lit the place up like little red stars in the night sky (kinda romantic, eh?). And by the amount of open space the Xcel Energy Center offers, it was pretty damn cool to look at.

The stage was pretty generic, a stack of vintage Marshall cabinets, 3 high by 6 wide, filled the left and right side of the center stage/drumset. The stage itself had a left, right and middle wing as well as a long center walkway that reached out to the middle of the venue. As someone that has a seen a few shows, I could see there was something 'special' at the end of that walkway awaiting the audience at some point in time of the show... (yeah, Angus guitar solo time!)

As the lights dimmed, the crowd immediately roars in response. The trifecta of huge video screens to the left center and right of the stage light up with a montage of astronauts in space landing on a distant planet then exploring for a bit only to come across a glowing vessel with the AC/DC logo on it. In a few moments that vessel is in space making its way to planet earth.... north America, Minnesota... St. Paul.... Xcel Energy Center! In a flash, just as the vessel crashes, out comes the band!

They opened with their latest hit, Rock or Bust which got the crowd roaring even louder than before. At this point, It was all smiles. Mesmerized by the ever-moving Angus Young on guitar and the body contorting, high schrill-of-a-vocalist sounds of Brian Johnson, I was having a blast. To watch these guys at their age (in their 60's) move and play like this was absolutely fascinating. As someone in his 40's at this point in time, I could only imagine what it feels like playing for 2 hours at that age. I bet it takes a few days to recover (no wonder they have a few days off between shows!)

Although the ticket was rather spendy ($160.00 - Club level, Section C22), I truly feel this was probably THE BEST SHOW I have seen in many, many years. The performance these guys put on was absolutely fascinating to watch, they didn't miss a beat when they played and truly proved why they are one of the biggest rock bands in history. I smiled almost all the way through the first handful of songs as I watched my friends rocking-out to each song, hit after hit. If this is the last time I see Brian Johnson and Angus Young, I am 100% content and very happy I saw them one last time.

See below for the set list (taken from Setlist.fm) as well as some photos taken by yours truly as well as some curated by others at the show and captured via Twitter the night of the event.


THE SET LIST
Intro
Rock or Bust
Shoot to Thrill
Hell Ain't a Bad Place to Be
Back in Black
Got Some Rock & Roll Thunder
Dirty Deeds Done Dirt Cheap
Thunderstruck
High Voltage
Rock 'n' Roll Train
Hells Bells
Given the Dog a Bone
Sin City
You Shook Me All Night Long
Shot Down in Flames
Have a Drink on Me
T.N.T.
Whole Lotta Rosie
Let There Be Rock (w/ Angus Young guitar solo)
Encore:
Highway to Hell
For Those About to Rock (We Salute You)